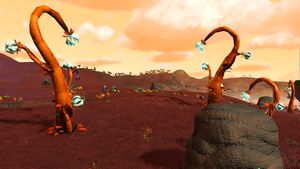 Exotic worlds are characterized by having various mysterious objects not found in any other biomes. When viewed from space, most of them look rocky and pockmarked by holes. However, there are some that look like giant, artificial Hex worlds. The game's code for these worlds is "Weird".[1]

Unlike dead worlds, there is no elevated strain on life support. Unique structures and vacant bases can be found here as well. Gold deposits can be found on these planets

Unlike other planets, where the surface, plant-life, and rock formations are largely determined by what biome the planet is; Exotic planets have a handful of unique surface types exclusive to this biome.

As of Visions these types have been expanded and standardized, but the Glitch subbiome carries on the multitude of possible types from the general exotic biomes to showcase a random one among them. Together with the illustrive Chromatic biome - also known as Mega Exotic - which too has many interpretations, the Glitch subbiome is the only one left to do this.

模板:See The surface of scorched worlds resemble barren worlds, being rocky and occasionally sandy. However, high temperatures has caused the flora to adapt in bizarre ways, with some having boiling liquids coursing through. When viewed from space, large channels of intense heat are visible. The resources Phosphorus, Solanium and Sulphurine can be found here.

Note that Hazard protection is always on due to high temperatures. Coolant Network upgrades are recommended, especially on extreme worlds.

模板:See Frozen worlds resemble lush worlds in the ice ages, having a surface covered by ice and snow. Trees tend to sprawl quite a lot here. However, the less the amount of flora, the higher the amount of dead trees. When viewed from space, they are generally snow-white in color. The resources Dioxite, Frost Crystal and Radon can be found here.

Note that Hazard protection is always on due to frigid temperatures. Thermic Layer upgrades are recommended, especially on extreme worlds.

模板:See Toxic worlds are characterized by a seemingly endless rain of toxic gunk, a muddy-looking surface that is occasionally covered by a bright film of some unknown substance, and a serious infestation of various mushrooms, fungi and highly poisonous and bizarre-looking plants. When viewed from space, the planet looks muddy and has rivers of toxic ooze flowing through. The resources Ammonia, Fungal Mould and Nitrogen can be found here.

Note that Hazard protection is always on due to high amounts of toxic substances. Toxin Suppressor upgrades are recommended, especially on extreme worlds.

模板:See Irradiated worlds have a rocky surface with spirals, vents of steaming radioactive gasses and highly mutated, warped plants. Viewed from space, they have lots of spiraling circles. The resources Uranium, Gamma Root and Radon can be found here.

Despite the radioactive nature of these planets, fauna are surprisingly common.

Note that Hazard protection is always on due to high amounts of radiation. Radiation Deflector upgrades are recommended, especially on extreme worlds.

Convert Dead To Weird is a property with a value of 0.5.

It was added in the Visions update that introduced new Weird (Exotic) biomes by converting previously existing Dead biomes.

Due to this change there is a higher chance to find these biomes, even in yellow star systems as well.

Life Chance is a property relates to the probability of which coloured system will be uncharted. Red ones have higher chance than any other.

Abandoned Life Chance property relates to the probability of which coloured system will be abandoned. Red ones have higher chance than any other.